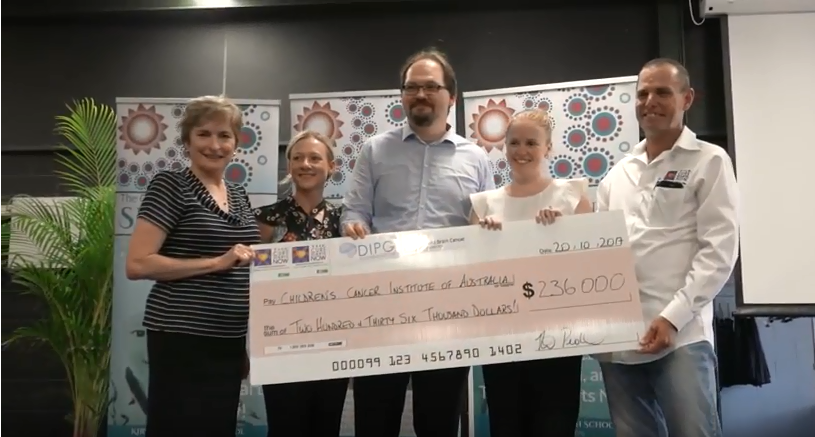 Whole genome sequencing on DIPG biopsy and autopsy samples have identified specific mutations in Histone H3, ACVRI, TP53 and ATRX causing heterochromatin silencing, genetic instability and alterations in DNA damage response pathways. Using a unique panel of patient derived DIPG cultures, we have further examined the molecular profile of DIPG to understand key oncogenic drivers within these tumours and identify novel therapeutic targets. Excitingly, we have found overexpression of multiple regulators which control the cell cycle. Of these, Polo-like Kinase 1 (PLK1) represents the most promising cell cycle factor for targeting in DIPG. PLK1 not only activates the key intermediaries which promote tumour cell growth and division, but also controls cellular response to DNA damage, inducing cell cycle arrest to promote DNA repair and avoid cell death while regulating the mechanisms used to escape arrest and continue tumour growth. Importantly, we hypothesise the rapid repair of DNA and recovery from cell cycle arrest controlled by PLK1 may account for the resistance to radiotherapy commonly seen in children with DIPG. We propose that inhibiting PLKI activity may impede cell cycle progression, block DNA repair and recovery following cell cycle arrest, radiosensitise the tumour and increase the levels of single stranded DNA above the threshold required to induce DNA lethality resulting in tumour cell death. We also hypothesise that the activity of PLK1 inhibitors may be synergistically enhanced through the development of rational combination therapies.

Our data shows PLKl is essential for DIPG tumour cell growth and that PLKl inhibition provides one of the most promising potential treatment applications for children with DIPG to date. We have found single agent PLK1 inhibition using clinically available therapies has extremely potent cytotoxic effects against DIPG cultures in vitro, with near complete eradication of DIPG cells, inhibition of colony formation and a significant induction of G2 cell cycle arrest all at exceptionally low nanomolar potency (IC50 <10nM). Using our most aggressive patient-derived in vivo model of DIPG, we have examined the activity of 2 different PLKl inhibitors as single agents and found that both therapies significantly and potently enhanced the survival of all treated animals (P=<0.0005). Importantly, PLKl inhibitors have shown the most potent anti-DIPG effect in vitro and in vivo compared with any other therapy we have tested in our models to date. We have also found that PLKI inhibition targets one of the major oncogenic drivers in DIPG, the Phosphoinositide 3-kinase (Pl3K) pathway. We have preliminary evidence PLK 1 inhibition is synergistically enhanced upon addition of the Pl3K inhibitor BKM120, providing a highly potent combination therapy for DIPG (Combination Index 0.0004). We have seen a similar effect of PLK1 inhibitors in combination with Temsirolimus (an inhibitor of Mechanistic Target of Rapamycin). As a result, we seek to conduct an analysis of PLK1 inhibitors in combination with inhibitors which target key oncogenic pathways in DIPG to identify the two most potent and synergistic combinations, their mechanism of action and their efficacy in our two orthotopic models of DIPG, providing the necessary quantum of data to move these treatments to the clinic.

Our team has the necessary skills and expertise to ensure success of the proposed project and successful clinical translation. PI Franshaw is an early career Research Officer at the Children's Cancer Institute with expertise in establishing and maintaining DIPG cultures, drug discovery, in vivo models of DIPG, advanced imaging and cancer cell biology. Since joining the Institute late 2012, she has helped establish multiple DIPG cultures, 2 in vivo models of DIPG and identified multiple novel treatments against DIPG currently under investigation. Her most recent discovery of the potency of PLKI inhibitors against DIPG is one of the most promising findings in the field to date. Co-PI Ziegler is a paediatric oncologist and director of the clinical trials unit at the Kids Cancer Centre (Sydney Children's Hospital), Group Leader at the Children's Cancer Institute and a Conjoint Associate Professor at the University of New South Wales. He is a national leader in early phase clinical trials in paediatric oncology, testing novel therapeutic agents in children with relapsed and refractory malignancies for whom there are no known effective treatment strategies. Support by A/Prof Ziegler will ensure success of the project and the rapid movement of effective therapies to the clinic to directly benefit children with DIPG.