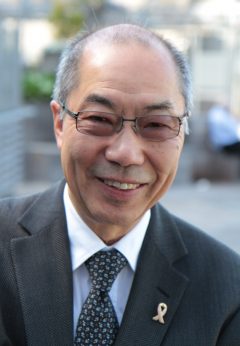 Diffuse Intrinsic Pontine Gliomas (DIPGs) are devastating pediatric brainstem tumors that lack effective treatment and are uniformly fatal. Patient studies have identified recurrent genetic lesions that drive the development of these tumors. Almost all DIPGs carry mutations in genes encoding either replication-dependent histone-H3 proteins (mostly HIST1H3B) or in a replication-independent histone (H3F3A). These mutations always substitute lysine with methionine at position 27 (K27M) of the H3 protein. The tumorigenicity of histone K27M mutations is thought to stem from epigenetic reprogramming of tumor-initiating glial cells in the brain. Moreover, recent genetic data strongly suggest that DIPGs can be clustered into distinct subtypes based on specific “partner” mutations that co-occur with the K27M H3 mutations. For example, most H3F3AK27M mutant tumors carry lesions in the well-characterized tumor suppressor gene TP53. This is not the case for HIST1H3BK27M mutant malignancies, which instead commonly harbor lesions that either cause a gain-offunction in ACVR1, a bone morphogenetic protein (BMP) type I receptor, or hyperactivate the PTEN/PI3K pathway. The oncogenic mechanisms of action of activating mutations in ACVR1 are poorly characterized. Understanding the mechanisms that drive DIPG subtype development, and how these tumors might differ in therapeutic vulnerability, is crucial for the development of effective DIPG treatments.

In our proposal, we will test the hypothesis that oncogenic synergy between epigenomic reprogramming induced by HIST1H3BK27M mutations and cellular hyperproliferation driven by ACVR1 and PTEN/PI3K pathway mutations underlie unique therapeutic vulnerabilities in DIPG tumors. We will deploy a multidisciplinary approach that combines complementary areas of expertise and reagents, including the generation and analysis of the first pre-clinical mouse models harboring DIPG-causing mutations in the endogenous Acvr1 and Hist1h3b genes. Using these models, we will characterize the molecular effects of Acvr1 and Hist1h3b mutations and dissect their interaction and synergy. We will then harness an innovative direct in vivo CRISPR/Cas9 platform to combine multiple co-occurring mutations and describe their oncogenic mechanisms of action. We will pay particular attention to investigating how PTEN/PI3K pathway hyperactivation cooperates with Acvr1 and Hist1h3b mutations. Finally, we will meld these analyses with human DIPG transcriptome data and perform functional experiments in patient-derived cell lines to uncover candidate therapeutic targets. We have already established a broad toolbox of reagents useful for our planned studies and have accumulated substantial preliminary data in support of our objectives.

We expect that our project will uncover the molecular mechanisms whereby ACVR1, HIST1H3B and PTEN/PI3K pathway mutations cooperate to drive DIPG development and progression. We further anticipate that our studies will reveal candidate therapeutic targets for tumors harboring this combination of lesions, and possibly for DIPGs in general.