NOT JUST ANOTHER CANCER CHARITY 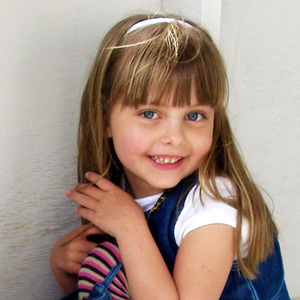 It all started with a little girl named Elena Desserich. At five years old she was the victim of a rare form of brain cancer (DIPG). Within months she lost her voice and soon afterward experienced partial paralysis. Still she kept fighting and inspiring those around her with her courage. Soon her story reached tens of thousands of people nationwide and her artwork, termed as "iconic" by other artists, became a fixture in hundreds of homes and hung on the wall of her local art museum. Today it serves as our logo and our inspiration to the fight we carry on in her name.

Elena’s story has been told thousands of times in over 20 countries worldwide, both in media and in the journal that her parents kept, telling her story to her younger sister. Today that same journal is published worldwide as a bestselling book titled “Notes Left Behind” – proceeds of which benefit The Cure Starts Now. Sadly, Elena’s fight ended just nine months after diagnosis in her bed alongside her mother and her father.

There are many more children and many more stories. They are why our mission is so important and why we battle through a unified effort to cure cancer. Each child represents a life, an opportunity, and a chance. They are part of our soul, our mission and their pictures grace our web site.

We are not a foundation for one child. We are a mission of many. This is why The Cure Starts Now fights for the cure for other children with brainstem glioma and cancer patients everywhere. What started with just one child now becomes the mission of people nationwide.

The cure for cancer is just as important as it is elusive. We can cure cancer one-by-one or we can focus on THE cure which we believe will come from a cure for pediatric brain cancers. The fight begins today and the cure starts now.